Cobham SATCOM announced the launch of a new SAILOR VHF

Clear communication can make the difference between a non-event or a major incident, therefore the SAILOR 7222 VHF is developed as a robust platform that fully complies with the forthcoming standards implemented by the IMO resolution on Bridge Alert Management (MSC.302(87)) that will be introduced August 2021, as well as IEC 62023-1 and IEC-62923-2.

Building on the well established decades-long technology leadership of the SAILOR VHF DSC Class A radios that came before it, Cobham SATCOM developed the SAILOR 7222 VHF DSC Class A with updated hardware and software features that unlocks even more potential. It also has an innovative new user-friendly 5.5” TFT touch-screen interface, which further streamlines workflows and optimizes operational safety and efficiency.

The SAILOR 7222 Class A VHF DSC comprises of two units connected with a standard Ethernet connection:

The SAILOR 7224 Control Unit is made to fit into existing SAILOR 6222 VHF DSC installations. It features simplified menu-driven operation via the responsive new touchscreen on the SAILOR 7224 Control Unit or a connected device with a browser to access the desired functions. Channels can also be selected using a rugged selection knob and the display can be customized with different color themes for optimum readability and visibility both day and night. 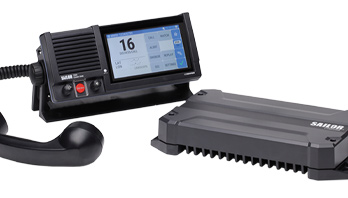 The SAILOR 7222 VHF DSC Class A is the most advanced SAILOR radio for demanding users operating within the SOLAS maritime environment.

Please enter your name and email address to receive a download link for the article “Decreasing total cost of ownership by Remote Monitoring” (published in Shipinsight Report June 2017).

Please enter your name and email address to receive download link to the General Terms and Conditions of Purchase.

Please enter your name and email address to receive download link to the General Conditions of Sales and Services.

Please enter your name and email address to receive download links to the quality certificates.

Please enter your name and email address to receive a download link for the case study about the HAL Vista class NavCom & Bridge retrofit.

Send me a quote!